Scorpions in Phoenix – What you need to know 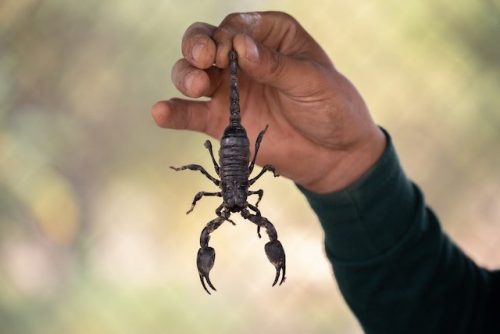 Scorpions in Phoenix and what you need to know about them.  Scorpions date back 350 to 400 million years ago, which makes them some of the oldest known terrestrial arthropods. At least 100 of the 2,000 species of scorpions around the world live in the U.S., and more than 50 species alone live in the southwest. Since most scorpions in the U.S. prefer warm, dry climates, they primarily live in states such as Arizona, California and New Mexico, but may also live in other states around the country.

Many people in the Phoenix area assume that every scorpion they come across is an Arizona bark scorpion. That’s not necessarily the case.

Arizona is home to dozens of species of scorpions. While all scorpions have venom that they might use to capture their prey, not all scorpions have venom that is harmful to humans and animals. Arizona doesn’t have the largest scorpions in the world nor the deadliest scorpions in the world, but it does have a scorpion with a rather potent venom: the Arizona bark scorpion. At best, a sting from that scorpion can be rather annoying, or, at worst, the scorpion sting can be extremely painful with longer lasting effects. Deaths from scorpion stings are very rare. People who are prone to have allergic reactions to stings, and those with undeveloped or compromised immune systems (the very young and very old), may have strong or severe reactions. Small pets may also have adverse reactions.

Below you’ll get some tips on how to identify the four most common types of scorpions that you are likely to find in the Sonoran Desert. 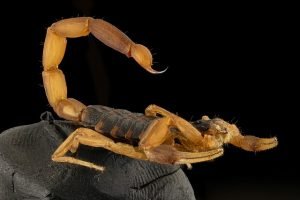 Centruroides sculpturatus is the well-known Arizona bark scorpion. It is readily distinguished from all other scorpions in the area by having long, slender hands and fingers, along with a long, slender tail or metasoma. In the desert, it is typically uniform tan-yellow to orange; at higher elevations, it may be striped. When at rest, the metasoma is held at the side and coiled to where the sting is directed to the base of the fourth segment. Occasionally in males, it is coiled horizontally over the ​body. Metasoma segments are subequal in length, long and slender in males. The Arizona bark scorpion is very common in rocky areas in the desert and found throughout Arizona.

The venom of a bark scorpion can cause severe pain, numbness, tingling, drooling, nausea, and vomiting in adult humans. This typically lasts between 24 – 72 hours. Temporary loss of function in the area stung is possible. It also may cause loss of breath for a short time. Due to the extreme pain experienced, some sting victims talk of sensations of “electrical jolts” after envenomation. The numbness can last for several days later.

Small animals like cats and dogs, young children, the elderly, and adults with compromised immune systems are at greatest risk of serious affects and even death (although this is rare). Extreme reaction to the venom is described as numbness, paralysis, frothing at the mouth, and a neuromotor syndrome that can be confused with a seizure with difficulty breathing, particularly in young children and smaller pets. 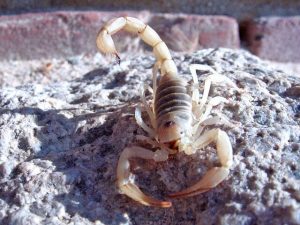 Hadrurus arizonensis is the popular Arizona giant hairy scorpion, the largest scorpion in the United States. Hairy scorpions are just that: hairy. The metasoma and pedipalps are densely covered in setae (hairs). No other American scorpions have such a dense covering of setae on the appendages. The pedipalps and metasoma are also relative in size; not robust, not slender. Dorsal surface dark; appendages yellowish, appearing greenish due to slight fluorescence. Interocular area of carapace unpigmented in ​the crescent from median to lateral eyes. The Arizona Giant Hairy Scorpion digs deep burrows or lives under surface objects. In Arizona, it is found in saguaro forests.

Although this scorpion is big, its venom is not very potent, and its sting is commonly perceived to be about as painful as a honeybee’s sting. … However, an allergic reaction to its venom can be fatal; symptoms can include difficulty breathing, excessive swelling, and prolonged pain.

Things to Know About the Arizona Giant Hairy Scorpion 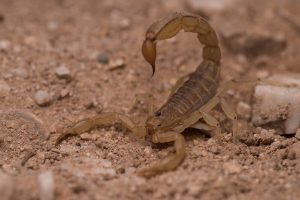 Vaejovis spinigerus is commonly called the Arizona ​stripetail scorpion. It is easily distinguished from all other Arizona scorpions by having a fairly robust, lustrous metasoma with keels that have underlying pigment, hence the name, stripetail scorpion. The dorsal keels on the metasoma terminate in a distinctly spinoid granule, which gives it the name “spinigerus” or “spine bearing”. The body is usually lustrous, the hands are smooth and lustrous, occasionally with the palm inflated. Color ranges from light yellow-brown to having dark stripes along the dorsum, which extend onto the carapace to the median eyes and lateral eyes, with the stripes forming a somewhat horned appearance. Females have been known to reach 70 mm, but are usually under 60 mm or 3 inches.

Things to Know About the Arizona Stripetail Scorpion 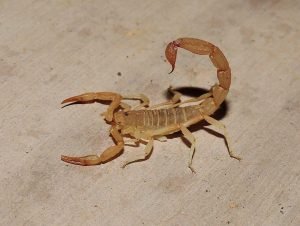 Vaejovis confusus is commonly called the yellow ground scorpion. It is yellowish and granular. It has slender hands and fingers, similar to the Arizona bark scorpion, but the first two metasoma segments are wider than long or as wide as long. Found throughout the Sonoran Desert where it burrows or digs scrapes under rocks or other objects.

Things to Know About the Yellow Ground Scorpion

What to do if you are bit by a scorpion

In most cases, scorpion stings don’t warrant a trip to the emergency room. If you are only manifesting mild symptoms, a scorpion sting can be easily treated at home through these steps:

Meanwhile, if a child, an elder, or a pet was stung, seek medical attention right away, especially if they are manifesting severe symptoms. Continue to apply cold compress on the affected area on your way to the clinic or hospital.

If possible, take the scorpion to the doctor

The best way to determine the right treatment for a scorpion sting is to know the type of scorpion that stung the patient. If you’re able to capture the scorpion, secure it in a container and bring it to your doctor. However, be careful when trying to catch it, and make sure that you don’t get stung in the process.